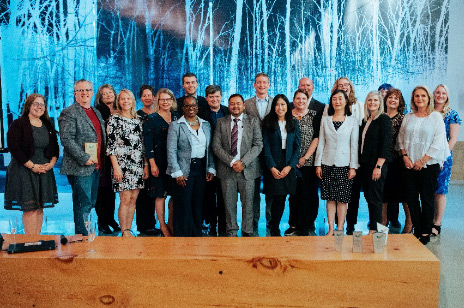 Portland, OR – May 23, 2019 – The Global Electronics Council (GEC), the organization that manages the EPEAT ecolabel, recognized the 2019 EPEAT Purchaser Award winners at an evening celebration held on May 22nd in Portland, Oregon. Fifty-nine (59) organizations, including cities, sta tes, US Federal agencies and companies from around the globe were honored for their decision to purchase sustainable IT products.

When combined, the 2019 EPEAT Purchaser Award winners realized cost savings of nearly $90 million across the lifetime of their purchased IT products. Along with these significant cost savings, the 59 EPEAT Purchaser Award winners also recognized considerable environmental benefits, including combined greenhouse gas reductions equivalent to removing 114,611 passenger cars from the road for a year; a reduction of more than 2,150 metric tons of hazardous waste; solid waste savings equivalent to that produced by 4,362 average U.S. households each year; a reduction in energy usage by 889 million kWh; and avoidance of nearly 1,500 metric tons of water pollutant emissions.

“The EPEAT Purchaser Awards ceremony is our opportunity to celebrate the many organizations and procurement representatives who are choosing to use their IT spend to positively impact the environment,” said Nancy Gillis, CEO for the Green Electronics Council. “When you aggregate the cost savings and other sustainability benefits attributable to the 2019 EPEAT Purchaser Award winners alone, it becomes immediately clear that all purchasers should be choosing sustainable IT products. EPEAT makes that choice simple.”